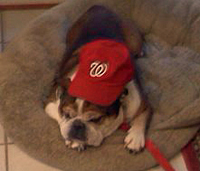 The wait is over. Sure, it’s a week earlier than last year but it sure doesn’t feel that way.

For most folks, that’s because expectations have never been higher for the parent club. As a minors guy, it means I have some semblance of a routine back again — the end of previews and Top 10, 20, 30, 40, 50 or more and the beginning of boxscores.

As mentioned earlier this month, I don’t expect there to be too much drama this year… at least from a minors’ perspective. Perhaps a guy competing for one of the last spots in the ‘pen or at the end of the bench.

The signing of veterans like Will Rhymes, Chris Snyder, and Chris Young seems to suggest that even a significant injury won’t automatically open the door for a minor-leaguer. Sorry to anyone sticking pins in their voodoo dolls in hopes of seeing, say, Anthony Rendon at second base on Opening Day.

In any case, the days without baseball for 2013 are gone. Time for us to peek at the goal for “our guys” for three or four weeks.