The 2012 Potomac Nationals will most likely be remembered by those that watched them closely (*ahem*) for two things: (1) the team that couldn’t win on the road (2) underachievement. You can argue against the latter to a certain extent, but it’s pretty hard to argue against the former: A 10-26 mark in the first half, a 12-21 mark in the second for a combined 22-47 mark that was third-worst in affiliated ball (Louisville, 22-51; N.W. Arkansas, 22-48).

This, of course, would be unremarkable except that in Woodbridge, the 64-win P-Nats were 42-28 — third-best in the Carolina League behind 74-win Myrtle Beach (42-26) and 87-win Winston-Salem (48-23). When I dug into it in early June, I discovered that at least some of it was attributable to the offense hitting nearly 100 points better on the road than at home, which doesn’t make a whole lot of sense since the Pfitz generally comes up as neutral in ballpark effects. Other factors are surely at play here, but it’s interesting (at least to me) nevertheless.

Underachievement is a little more in the eye of the beholder. It’s often the disconnect between expected and actual performance. While as a fan (disclosure: see first sentence in “About” below), I feel like this team underachieved, as prospect follower I have to allow for the alternate, more objective interpretation that perhaps some of these guys simply hit their ceiling. There just aren’t very many guys that finished in Woodbridge in August that I don’t expect to see again next April; nearly everybody that deserved a bump up to Harrisburg got one.

So let’s take a look at the first P-Nats team to miss the Carolina League playoffs since 2009:
HITTING

There are two things that strike me when I look at these two comparisons: (1) How similar Potomac’s pitching totals were to Hagerstown’s (2) How much better the hitting was than I would have guessed (nearly mediocre vs. subpar). What didn’t shock me was the low OBP. Francisco Soriano, Blake Kelso and Michael Taylor shared the team lead with 40 walks drawn in 87, 106 and 109 games. David Freitas was next with 39 — in 78 games. Seemed like every time I would fill out my scorecard, I’d be filling in OBPs with numbers that looked like batting averages.

That’s a natural segue to the Top 13* batters (* for 2010 Draft Picks, ** for DSL graduates). Full team statistics can be found here. *Another “extra” to catch a notable 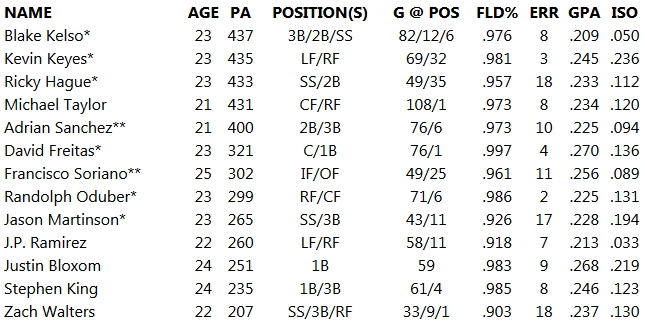 There are some bright spots if you look for them — Kevin Keyes and Jason Martinson’s power, for example. Ricky Hague demonstrating he can play second base (.983FA in 35G). Michael Taylor living up to the hype for his defensive skills in center. But there are also things to pick that aren’t nits — Taylor, Martinson, and Keyes whiffed a lot. The team’s left fielders gave the team’s centerfielders ample opportunity to show off their range.

As aforementioned, none of this is unusual — it’s emblematic of the level: players too good for Low-A, but not quite good enough for AA. The question is whether or not there’s a “yet” in that sentence. This is often where some players repeat… and many will stall (see: Peacock, Brian; Martinez, Carlos).

On to the pitchers…

Well, at least there wasn’t much in the way of mediocrity. The pitchers were either good or they were bad. And even some of the “bad” were pitchers had their moments of “good.” The Matts are a good example of this. Swynenberg was terrific in April, pitching one of the best games of the year on the final Sunday of the month. Grace finished the season strong, capping off his season with eight shutout innings against playoff-bound Wilmington on the final Saturday of the season, a game that Steve Souza won with an 11th-inning grand slam.

Enough has been “said” about how good Nathan Karns was this season. Unfortunately, that leaves us with discussing how disappointing Robbie Ray’s season was. Most of the damage was done in the second half — 1-9, 7.67 vs. 3-3, 4.89 — with the southpaw becoming particularly prone to giving up the longball (10 in his last 10 appearances). Perversely, I was almost wishing to learn that he had been hurt; easier to give him a pass, so “speak.”

Unfortunately, I don’t have the magic bullet as to the why (and if I did, I wouldn’t tell 😉 As the season progressed he struggled with his command, issuing nearly double the walks and seemingly always falling into hitter’s counts and it was usually in the early going, not the middle innings. He turned 21 four weeks ago, so it’s not the end of the world, but it’s the primary reason he still makes the…

OBLIGATORY TOP FOUR LISTS
I thought about only listing three apiece, but decided to go with four as an acknowledgement of the bias that comes with being a disappointed fan of the team. There’s more projection here than usual, as alluded in the discussion of Ray, and I’m giving some props to the guys that finished the season strong.