For some, the memory of the 2011 Harrisburg Senators will not be how the team took first place in late April and won the division, leading nearly wire-to-wire, despite losing its ace pitcher, its all-star second baseman, and its #3 hitter to promotions and a trade. Nope. It will be this and the wondering if things might have turned out differently if that hadn’t happened.

The more painful reality is that probably didn’t make that big of a difference. The Flying Squirrels won 13 of 21 regular-season meetings and just seemed to have the Senators’ number whenever they matched up. They lost eight of their last 11 games, scoring more than two runs just three times, and scored a total of three runs in three playoff games. Simply put: The Senators were cold going into a short series against a team they had trouble with even when they were playing their best baseball.

This is not to dismiss the disappointment — it’s funny to me to see proclamations each September about how winning in the minors is overrated… or underrated, though it does seem to depend on how your organization is doing at the time — but to remind folks that it was quite a journey to get to the playoffs, as one of our contributors first wrote on this site a few weeks ago.

So let’s take a look at how the 2011 Harrisburg team compared to the rest of the Eastern League, shall we?
HITTING

The Senators were 9th in runs scored despite leading the league in home runs. Likewise, they were 11th in on-base percentage but third in stolen bases and triples. It’s an unusual combination, though I think we’re seeing a trend across the organization when it comes to running (GCL, 5th; NYPL, 3rd; Sally, 3rd; Carolina, 1st) and getting on base (6th, 1st, 3rd, 3rd). Unfortunately, the closest player to possessing both skills is Steve Lombardozzi, so the folks reading this site looking for the answer to the problem with Ian Desmond at leadoff might be disappointed.

Pitching was this team’s strength, as they were first in strikeouts and WHIP, second in ERA, walks and HRs allowed, third in runs allowed. The defense wasn’t so bad either, finishing fifth in terms of percentage and seventh in terms of errors committed, and second in terms of stolen bases allowed. Admittedly, some of this can be chalked up to the veteran nature of the pitching staff (e.g. Erik Arnesen, Oliver Perez), but it should be noted that 24-year-olds (the league average age) accounted for 31.5% of the innings thrown and 62 of the 142 games started. Until the likes of Wirkin Estevez, A.J. Cole and Robbie Ray come to town, an older pitching staff is probably going to be the norm for the forseeable future.

Now, let’s drill down to the Top 16’s for the batters and pitchers — an expansion from the Top 12’s so as to include notables such as Bryce Harper and Erik Komatsu as well as Danny Rosenbaum and Pat Lehman. Full statistics for the team can be found here. 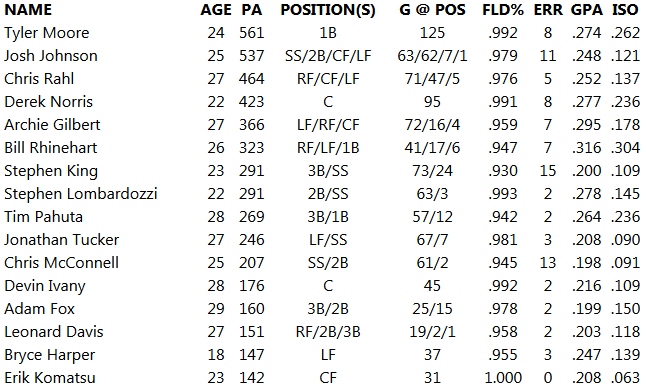 Now when I say that we’re hurting for age-appropriate position prospects at AA and AAA will folks believe me? Just six of the Top 16 batters were 24 or younger. This is why when I see folks elsewhere chiming that the farm has been rebuilt, intimating the job is complete, I cringe. It’s true that three of those six are likely to be in DC by Opening Day 2013, but need I remind folks that unfortunate incidents occasionally occur?

Age aside, you can see from the totals that the team compensated for its low OBP with some serious slugging (.316 ISO for Dolla?!) while nearly everybody was a decent fielder and/or had above-average speed — perfect complements to the aforementioned veteran pitching.

Lastly, in case anyone was wondering… 18-year-old Bryce Harper “struggled” to only reach the league averages for the triple-slash rate stats, hitting it on the nose for OBP and SLG, and missing BA by .003. I’m not prone to fanboy one-handed typing, but that’s pretty damn impressive. 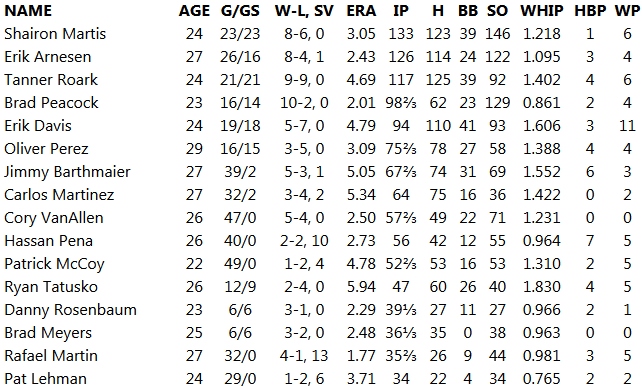 Quite a few extremes, no? That’s part of the reason I like to drill down to the individual stats: Because the guys that were good, were really good — offsetting the guys that weren’t up to snuff, though one thing I did notice is that nearly all of the high ERA guys had significantly lower FIPs (e.g. Ryan Tatusko, 5.94 ERA, 3.97 FIP), which make sense with a team that’s in the upper half of the league in terms of defense.

Like the hitters, one gets the feeling that Washington is building the uppermost levels of the farm to be interchangeable between AA and AAA, creating an environment in which prospects bubble up to the bigs while surrounded by veterans. That’s just what jumps at me when I look at this list of guys that seemed to be either 24 or 27. Of course, that inference could be drawn into a comic like this.

OBLIGATORY TOP FOUR LISTS
That’s no typo. I just can’t pick a #5 for either the batters or the pitchers with a straight face. I’m already including a couple of guys that may be voting for president next year for the third time. Pat McCoy, Stephen King, Erik Komatsu, Tanner Roark are the requisite ages, but none really had that good of a season. I’m already sure that next week it’ll be a Top 5 for the entire Syracuse team (that’s what I did last year), but I felt like doing that here and now might be misconstrued. This is what I mean when I say that the rebuilding job is not complete: There simply aren’t 10 guys at the so-called marquee level of prospects that fit the bill.