If you just look at wins and losses, the 2011 campaign was a step back from 2010 for the DSL Nationals. If, however, you consider the trend of the team getting younger for the third straight year, then there’s a modicum of success for this year’s crew. The average batter was 18.1 years old, the average pitcher was 18.9 years old; the league averages were 18.5 and 19.0. In 2008, the year the DSL Nationals1 team won the league, those figures were 19.3 and 21.2 respectively.

Of course, the real sign of success is going to be how many of these kids “graduate” to the GCL and beyond. Three bats (four if you count Bowden’s folly) and six arms made the jump from the D.R. to the U.S. from 2010 to 2011. In the 2009 to 2010 offseason, four position players and three pitchers made that leap. Of those seven, only Manny Rivera made it north of Florida for any significant playing time in 2011. That’s not all bad news because among those six are a couple of teenagers (Estarlin Martinez and Gregory Baez, both 19).

Following my size 13B’s from last year, let’s take a look at how the team did as a whole vs. the league averages…

Like last year, the team was slightly above average on offense, though the tradeoff was more hits for fewer walks. The pitching wasn’t quite as good and it wasn’t helped by a defense that was 28th out of 33 teams in terms of errors committed. Sight unseen, I’d attribute many of these things to a younger team, particularly the lower walk totals.

So who were the 2011 DSL Nationals? Using 100PA as the cutoff and defensive games played, here’s how the position players broke down. Folks interested in seeing the full team and its stats can click here. 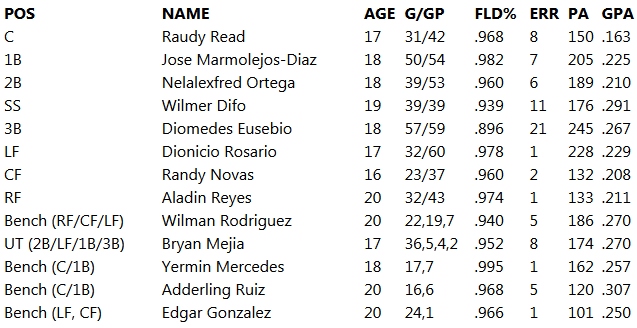 The fielding percentages are at the position listed (G/GP = Games At The Position/Games Played), except for the utilty/bench guys, for which the percentage is cumulative and the number of games at each position is listed between commas. As aforementioned, this was not a strong fielding club. It is, however, encouraging to see such strong GPAs from some of the teenagers.

Two names that did not make the “cut” but will get some play right here are Algenis Ramirez and Junior Geraldo. The former is a 17-year-old signed from the Dominican Prospect League, the latter we’ve since learned is an 18-year-old but little else can found on him outside of this site. Ramirez had the team’s best walk rate at 17.5%, Geraldo put up a sick .909 OPS — both in admittedly small sample sizes (63 and 71 PAs, respectively).

On to the pitchers, listing the Top 12 in terms of innings pitched…

I purposely included Miguel Navarro as the 12th pitcher even though he was tied for the position to illustrate the following: The D-Nats had four pitchers with four-digit ERAs, responsible for more than 20 percent of the total runs surrendered despite pitching just 37 innings combined, or roughly six percent of the team’s total innings pitched. The point? They were clearly willing to let these kids (three 18 yo’s, one 17-yo) take their lumps.

As you can see from the HBP and WP numbers, this was a wild bunch — even by DSL standards. But you can also see there were some guys that had strong peripherals: Ivan Pineyro, Gilberto Mendez, and Joel Barrientos all had K rates of 24% or better, stranded more than 71% of their baserunners and walked less than three batters per nine. Which of course brings us to our…

OBLIGATORY TOP FIVE LISTS
Last year’s #1 picks — Wirkin Estevez and Jean-Carlos Valdez — both “graduated” so a pat on the back. My #5 bat (Paul Chacin) got released, so a facepalm. I don’t feel quite so bad when more than a couple of the draft gurus I follow on Twitter have remarked that getting too excited about the DSL stats is an errand for the foolish. And let’s face it: This is basically looking at those numbers, factoring in age, and going with a gut feeling.