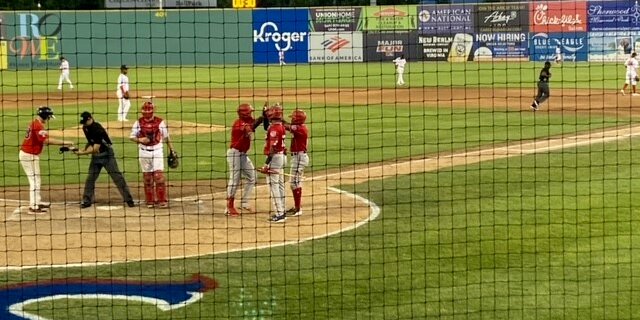 It was a game that both teams had to win… but neither team seemed to want to win it. The Fredericksburg Nationals somehow prevailed, 8-7 in 10 innings over the Salem Red Sox.

As noted yesterday, the FredNats needed to win and get some help from the C.L. North cellar-dwellers, which they did, as both the Mudcats and Hillcats lost to create a three-way tie for 2nd place between Salem and the ‘Burgs. All three teams are one game behind Carolina.

Early on, though, it looked like Fredericksburg might just roll over as Salem jumped on Andry Lara for three runs with two out in the 1st, starting with a bases-loaded walk and ending with a two-run double.

But as you might’ve already guessed, Lara settled down to put up goose eggs in three straight innings, working around an error in the 2nd, retiring the side in order in the 3rd – the only time it happened in the game – and leaving the bases loaded in the 4th.

The Fredericksburg batters stranded seven through the first four innings before Salem gifted them with three straight walks to open the 5th. A wild pitch broke up the shutout, then Branden Boisserie doubled in two to tie the game at 3-3 (pictured above). Lara put up another zero on the scoreboard in the bottom half of the inning.

In the top of the 6th, Leandro Emiliani launched a two-out, two-run HR to give the FredNats their first lead at 5-3. Lara nearly had his third quality start but was dinged for a solo HR to lead off the bottom of the 6th. He would finish with four runs let in on six hits and three walks. He struck out three, with the last one coming on a 96 mph challenge pitch after a long foul flyball.

Lara was consistently hitting 94 and 95 all night long, flashing a couple of changeups (low-80s) and two-seamers (high-80s), and a few “baby sliders” (mid-80s). The strength and durability are what folks should be impressed by as the Venezuelan is still a teenager, as he threw 100 pitches without showing any signs of tiring.

After Cody Greenhill worked around a leadoff single in the 7th, Andrew Alvarez was tasked with either building a bridge to the 9th or a two-inning save. He did neither, blowing the 5-4 lead in the last of the 8th with a two-out triple to Salem’s #9 batter, then coughing up two more in the bottom of the 9th to lose a 7-5 lead, which had been courtesy of Jacob Young’s two-out, two-run single in the top of the 9th.

The Red Sox gave it away in the 10th on their sixth wild pitch of the night, enabling the FredNats to score without a hit… or the ball leaving the infield.

Despite his horrific line of three runs on five hits over two innings, Alvarez was the winning pitcher. The save went to Riggs Threadgill, who got a popup and two groundouts in the 10th to earn his first save.